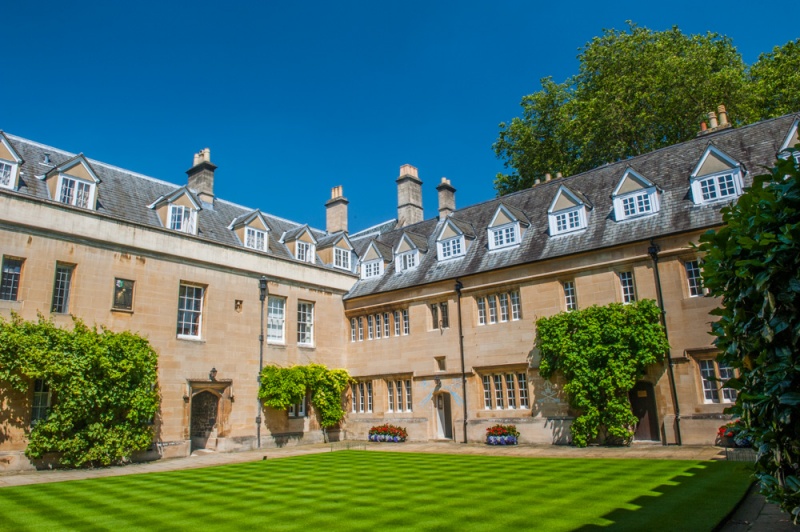 Lincoln College is built around one of the best-preserved quads (central green space) of all Oxford Colleges. The first buildings around Front Quad were constructed on the west range in about 1430. The hall and kitchen in the north range followed seven years later. 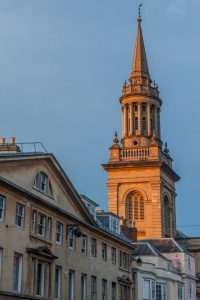 The spire of
Lincoln College chapel

The college was founded by Richard Fleming, Bishop of Lincoln, in 1427. Fleming named his new creation 'The College of the Blessed Mary and All Saints', Lincoln, in the University of Oxford, commonly called Lincoln College'.

Thankfully it has been shortened over the centuries to simply 'Lincoln College'. Lincoln College has suffered from lack of funds over the years, but the positive outcome of this relative poverty is that the college buildings have remained essentially unaltered since they were built.

The first part of the college to be built was the range facing onto Turl Street, with a grand entrance gatehouse with a stair on either side. Over the gateway was a Tower Room for the Rector. At the top of the Tower was a strongroom, where college archives are kept today.

In 1437 the kitchen and Hall were built, with a chapel on the first floor. A new chapel was erected in 1631, and the library was installed in the 15th-century chapel.

The hall at Lincoln College is a treasure - the 15th-century timber-beamed roof is a lovely example of medieval workmanship in wood. The floor is made of 16th-century planks, and the walls were panelled in the early 18th century.

The Hall is perhaps the most striking room in the college open to visitors. It originally had an earthen floor, with an open hearth in the centre. The walls boast panelling installed in 1701. Money was short, so only some of the panelling is oak; the rest is plain wood painted to resemble the more expensive oak.

The timber roof is 15th century, but the fireplace was added by TG Jackson in 1889. It bears the initials RF and TR, for Richard Fleming and Thomas Rotherham, the two college founders. The Hall is lined with portraits of college Rectors, Fellows, and benefactors. One portrait depicts John Wesley, a Fellow from 1728-1751. There are two portraits of Nathaniel, Lord Crewe, by Sir Godfrey Kneller. 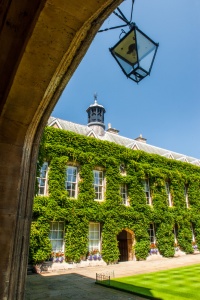 Look for the portrait of Rector Tatham over the High Table. This illustrious gentleman was famous for once giving a sermon so long and boring that the only person able to last it out proved to be dead!

Look up as you enter the hall and you will see the Lincoln Imp, modelled after the famous stone carving in the Angel Choir of Lincoln Cathedral. The figure replaces the Devil of Lincoln College, a grotesque carving that literally "lost its head" in a storm. The older carving gave rise to a saying, "to look on one as the devil looks over Lincoln".

The Wesley Room in the south range at Lincoln is thought to be the room used by Methodist reformer John Wesley when he was a Fellow here. The room has been restored to include period furnishings and Wesleyan memorabilia, including early editions of his sermons. Wesley's Room can be viewed through a glass door, accessed via Staircase II in the Front Quad.

Pass through Front Quad and you will enter Chapel Quad. Though the buildings appear similar in style to the 15th-century construction around Front Quad, they are actually products of the 17th century.

The College Chapel is a delightful building, constructed 1629-1631 on the site of the college's bowling alley! Due partly to lack of funds over the years, Lincoln's chapel has remained much as it was built, with some of the finest painted glass windows in Oxford. The pulpit dates from about 1630, and it is portable, so that it could be moved into the centre of the chapel when it came time to preach the sermon.

The screen is made of cedarwood, and the front pews and ceiling were installed in the 1680s. The magnificent east window is the work of Abraham van Linge, 1629-1631, and depicts a dozen scenes from the life of Jesus. Though they look like stained glass, they are actually enamelled.

The north and south windows are also by von Linge and depict apostles with their symbols. The front pews bear beautifully carved statues of the Four Evangelists, carved in the 1680s. Look for 18th-century graffiti etched into the pews by bored students.

There is a long-standing rivalry between Lincoln College and neighbouring Brasenose. There are two stories about how the rivalry began. One story says that a student of Lincoln killed a Brasenose student in a duel.

The other says that an angry mob of townsfolk were pursuing two students, one from each college. They reached the Lincoln College entrance, where the porter admitted 'his' student but refused entry to the Brasenose man, who was killed by the mob. As penance, Lincoln College members invite Brasenose members for free beer each Ascension Day.

Lincoln College welcomes visitors. The main entrance is on Turl Street, between High Street and Broad Street. As of this writing, normal hours are afternoons during the week, with longer hours on the weekend, and there is no fee. Please check the official website for changes. 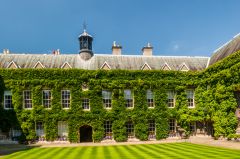 More self catering near Lincoln College