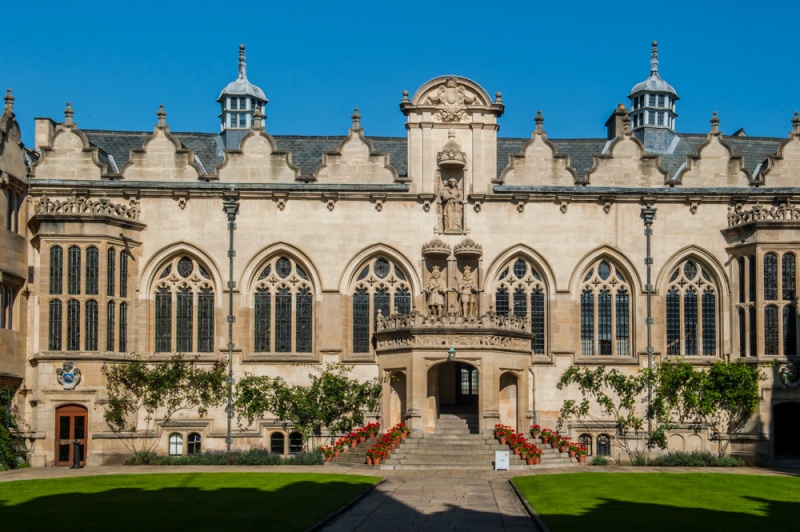 The original name of Oriel College was "House of the Blessed Mary the Virgin in Oxford". The "oriel" refers to the oriel windows of a former tenement building called Le Oriel which stood in the south-west corner of the college site. It was sometimes called King's Hall or King's College, but by 1367 Oriel College was the common name.

Oriel was founded in 1324 by Adam de Brome, a functionary at the court of Edward II. Brome obtained a royal license to establish a small group of scholars, to be housed at Tackley's Inn on High Street.

He must have changed his plan to a more ambitious one, for shortly after he convinced the king to re-found the college and create a set of statutes. Edward not only agreed, but he also gave the new college the gift of St Mary's Church, which provided extra income for the new college. It is fair to say that Oriel College was co-founded by Edward II, making it the oldest royal foundation.

Unfortunately, the king lost his life the following year, and a new patron was needed. One was found in the person of Henry Burghersh, Bishop of Lincoln. Curiously, despite the Bishops of Lincoln laying down additional statutes and injunctions over the centuries, a court case in 1726 decided that the original statutes were still in effect, making the crown, in the person of the Lord Chancellor, the official head of the college.

Like other Oxford colleges, Oriel consisted solely of graduate fellows under a provost. Undergraduates were not allowed until the 16th century. The focus of study was on theology, medicine, and law, with arts added later. 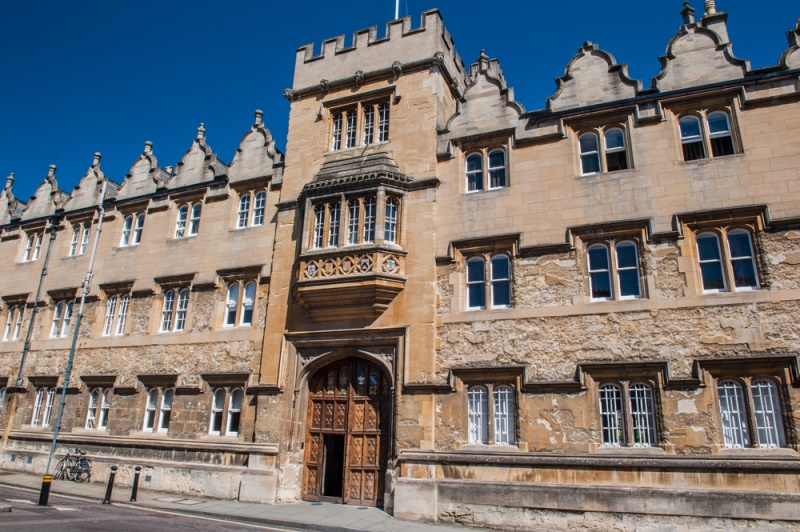 It is interesting to read the medieval list of servants employed by the college. There was a manciple (the person in charge of buying a storing food), cook, subcook, barber, washerwoman, a servant for the provost, and a bible-clerk (bibliotista) to read the Bible to the fellows during meals.

Many of the original medieval buildings were rebuilt in the early 17th century, though they echo the Gothic style of the earlier buildings. The hall and chapel of the 14th century St. Mary's Hall survive, though the chapel is now the Junior Library and the hall is the Junior Common Room.

Parts of Oriel College were used to house the court of Charles I during the Civil War (more were lodged at nearby Merton College).

The chapel is the third to serve Oriel College. The first was begun around 1373 and rebuilt sometime before 1566 on a new site flanking the Front Quad. It was rebuilt in 1642 and has remained largely unaltered since then. Highlights include a bronze lectern of 1654 and a black and white marble floor of 1677. There are 17th-century stalls and screens, altar and communion rails. The organ case dates to 1716. A small piece of medieval glass survives in the north-west gallery window.

Renowned architect James Wyatt is responsible for the peaceful tree-flanked Library in the Back Quad. More recent is the 20th century Rhodes Building, which fronts onto High Street. This was built in honour of Cecil Rhodes, a former undergraduate who left part of his enormous fortune to Oriel. Look for the bust of Cecil Rhodes on the exterior of No. 6 King Edward Street.

Oriel College is usually open to visitors during the afternoon throughout the year except during Trinity term (mid-April - June). There is a small charge.

More self catering near Oriel College