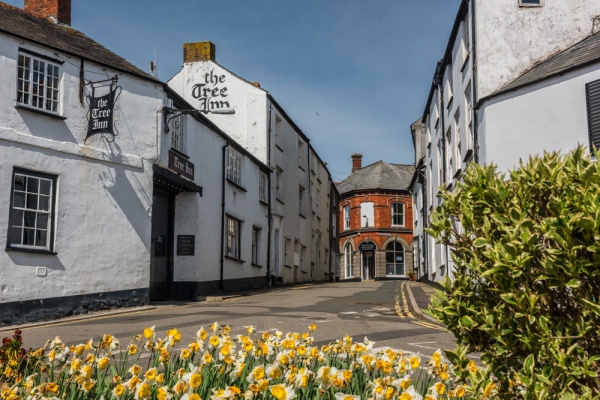 The historic town of Stratton has a history going back to the time of King Alfred, and the town was mentioned in Alfred's will around AD 880. That sense of history gave rise to a local saying, 'Stratton was a market town when neighbouring Bude was just a furzy down'.

In other words, Stratton was a well-established town when neighbouring Bude was nothing more than empty downland. Things have changed since then, and Bude is much the larger town but Stratton retains so much more a sense of its long history. Curiously, Stratton is technically a part of Bude, at least for administrative purposes.

Stratton was mentioned in the Domesday Book of 1086 and was one of Cornwall's ten ancient shires, or administrative areas. Its importance is reflected in the fact that in 1207 King John granted Stratton the right to hold three fairs a year.

The town grew up on the banks of the River Neth, now renamed as the River Strat. The town name comes from Stratneat, from the old Cornish words for a flat valley formed by the Neth. An alternative explanation is that the name comes from the Old English 'strat' and 'tun' meaning a town on an old Roman road. 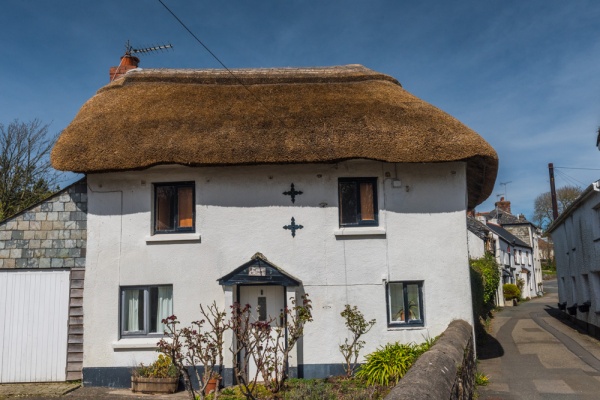 The Battle of Stratton

During the medieval period, Stratton was a stopping place for pilgrims travelling to Hartland Abbey in Devon, and the influx of pilgrims accounted for several chapels in addition to the striking medieval church of St Andrew. The church survives but most of the chapels have gradually been converted into private dwellings.

Perhaps the most important date in the history of Stratton came on 16 May 1643 when Parliamentary troops met Royalist supporters at Stamford Hill in what is popularly known as the Battle of Stratton. The Parliamentary army under the Earl of Stamford was camped at Stratton, arrayed in an attempt to prevent the Royalist army under Sir Ralph Hopton from marching north. Since the manor house in Stratton would have been the most important residence in the area it is logical to assume that the Earl stayed there.

The Royalist troops numbered about half the size of the Parliamentary army. They marched from Bude, beginning from the area near the present golf course. Among their numbers were Sir Bevil Grenville, whose family had owned Stratton manor since 1576.

Grenville and his men met Hopton's soldiers in a fierce battle that lasted all day and was only resolved when the Royalists charged up Stamford Hill and scattered their enemies. Some 300 Parliamentarians were killed and 1700 taken prisoners. The dead from both sides were buried in unmarked graves in St Andrew's churchyard. 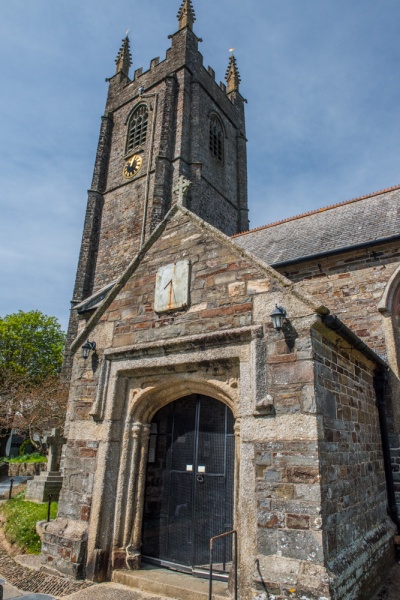 St Andrew's dates to the 14th century but incorporates stonework from an earlier Norman church. In the porch is a fascinating oak door from Stratton Gaol, now demolished, with the word 'Clink' outlined in metal studs. Clink is a Devon and Cornwall term for a single-cell prison.

Historic features inside the church include the memorial brass to Sir John Arundell (d. 1560), known as Jack of Tilbury, a royal navy commander under Henry VIII and Edward VI. Look for the work effigy of the 14th-century knight, a member of the Blanchminster family who paid for the south aisle.

During the medieval period, Stratton had a thriving industry dealing in leather. Hints of this industry can still be found today. For example, Poundfield was the area where animals were kept before being slaughtered and their hides tanned in large pits and stretched in a rack park. 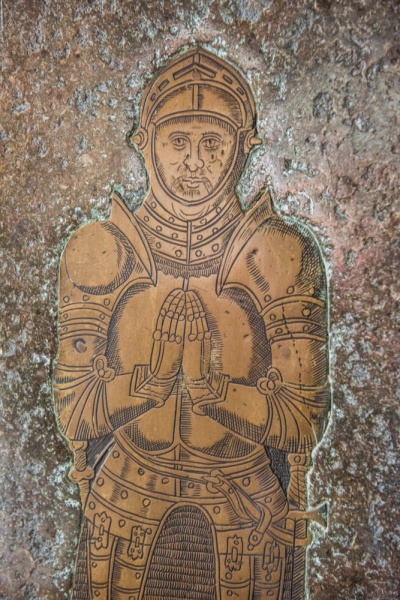 Perhaps the most famous native of Stratton was Anthony Payne, dubbed 'The Cornish Giant'. Payne was said to stand 7'4" tall (over 2.2m) and grew to weigh 32 stone (450 pounds/204 kilograms). He was born in 1612 at the manor house and served the Grenville family his whole life.

He was a personal retainer of Sir Bevil Grenville, one of the leading Royalist commanders during the Civil War. He fought at the Battle of Stratton (actually fought at Stamford Hill) in May 1643 and at the Battle of Lansdown where Grenville was killed. Payne came back to Stratton after the battle and had the sad duty of bringing Sir Bevil's body to Kilkhampton for burial and telling Sir Bevil's wife Grace that her husband was dead.

Upon the Restoration of the Monarchy in 1660 Payne was appointed Halbadier of the Guns at Plymouth. When he retired he moved back to Stratton and lived out the remaining years of his life in the manor house where he had been born.

The manor house is now the popular Tree Inn. When Payne died in 1691 his coffin had to be lowered through the floor of his room as the doorways were too small to allow the coffin to pass. He was buried under the floor of St Andrew's church.

And there the story might have ended but for a church restoration in 1888 when the floor was dug up and several graves found. One of the graves contain an oversized coffin. when opened, the coffin was found to hold huge human bones. were these the bones of the Cornish Giant? Alas, we will never know, for the bones crumbled when they were exposed to air.

In the courtyard of the Tree Inn hangs a portrait of Anthony Payne, a copy of a famous portrait painted by Sir Godfrey Kneller. The original hangs in the Royal Cornwall Museum in Truro. The inn's restaurant is made with old timbers from ships wrecked along the Cornish coast. 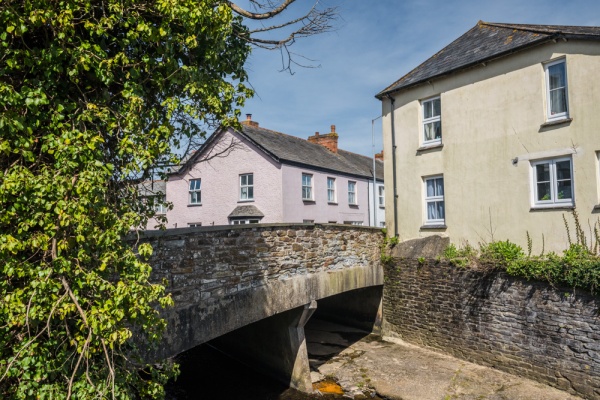 Bridge over the River Neth

The Tree Inn is one of Stratton's most delightful historic buildings, having served first as the manor house then as a posting house and excise office. Another old hostelry is the Kings Arms on Howell's Road, a 17th-century coaching inn.

It is fascinating to explore the older parts of Stratton, with it has numerous historic buildings and old cottages. Near Howell's Bridge is a row of traditional 17th-century cob and thatch cottages and there are several other thatched cottages around Cot Hill and Malden Street.

It is well worthwhile just strolling around Stratton and enjoying the numerous historic buildings. Access is easy, as the A39 coast road passes directly through the town, and there is a public parking area on Howell's Road (the A3072). 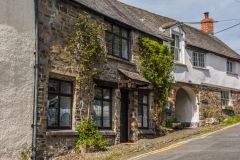 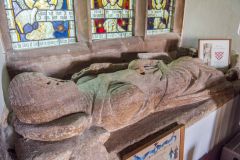 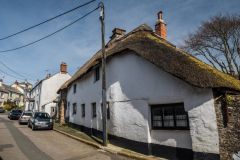 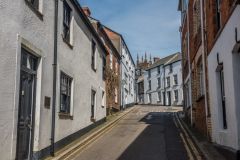 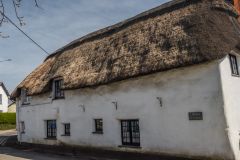 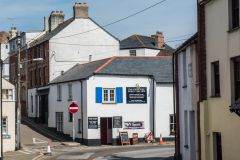 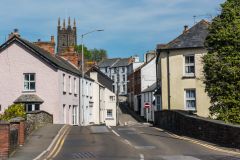 More self catering near Stratton

More bed and breakfasts near Stratton