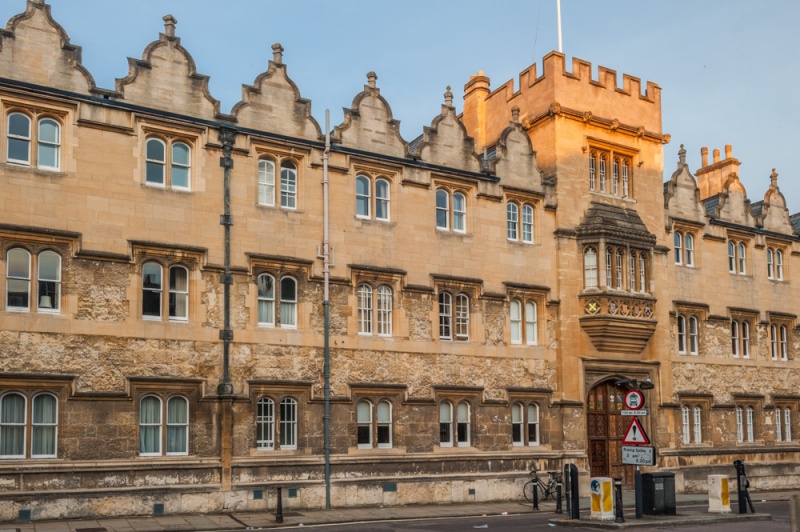 Corpus Christi is one of the smallest colleges that make up Oxford University, and boasts the oldest complete quad of any college.

Richard Fox, Bishop of Winchester, was a senior advisor to Henry VII. In 1512 he decided to establish a new college at Oxford University to train monks from St Swithun's Priory in Winchester. If he had stuck with his original intention the college would have been dissolved by Henry VIII two decades later, but thankfully Fox decided to expand the college's scope to be a centre for the study of the classics, with a focus on the humanities and science.

The bishop laid down the official college statutes in 1517, and that year is usually considered the beginning of the college, though construction began 5 years earlier.

Fox himself designed the main quad; a courtyard ringed with ranges for the library and dining hall, reached through a towered gatehouse. The first college president was John Claimond, a good friend of Queen Catherine of Aragon. The queen often visited Claimond at Corpus Christi when her husband, Henry VIII, was hunting at Woodstock, just north of Oxford.

The library, established at the same time as the college, had perhaps the finest collection of books and manuscripts in Europe, with works in Latin, Hebrew, and Greek. The scholar Erasmus visited the library in 1519 and wrote an admiring letter extolling its virtues. Highlights include a copy of the Anglo-Saxon Chronicle said to have belonged to Alfred the Great, and a psalter owned by St Thomas Becket. 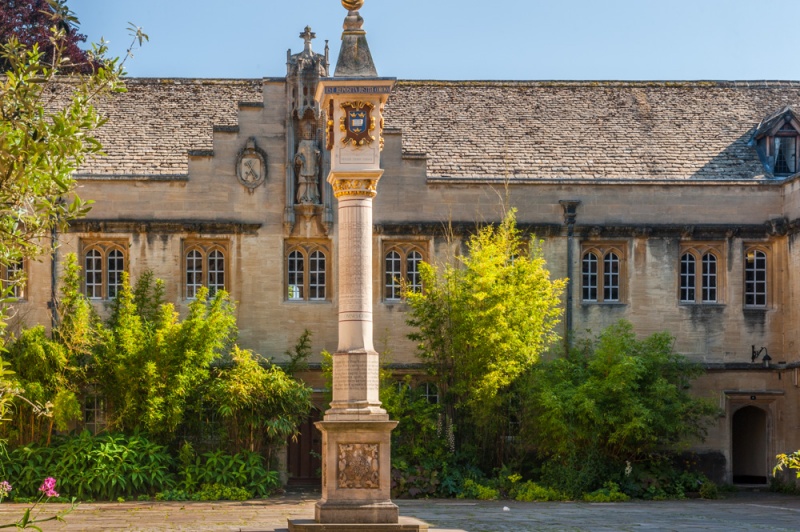 The main quad and Turnbull Sundial

One early teacher was Juan Luis Vives, who also served as tutor to Mary Tudor, later Mary I. Another early fellow of Corpus Christi was Reginald Pole, who went on to become Archbishop of Canterbury.

The College took a leading role in creating the King James Bible, published in 1611. The College president was John Rainolds (Reynolds), who organised the translation of the original texts used to create the Authorized Version of the Bible.

Perhaps the most famous feature of Corpus Christi is the gilded statue of a 'pelican in piety' set atop a painted stone sundial column in the centre of the main quad. The pelican is shown plucking her own breast, a reference to a medieval belief that the mother pelican drew blood from her own breast to feed her young. The pelican became a Christian symbol for self-sacrifice and the blessed sacrament; Christ feeding believers with his own body and blood.

The Pelican Sundial was built by Charles Turnbull in 1581, and for that reason is sometimes called The Turnbull Sundial. It has 24 different dials, with signs of the Zodiac, phases of the moon, and the gilded pelican sitting atop an armillary sphere; a hollow framework of rings symbolising planets orbiting the earth. 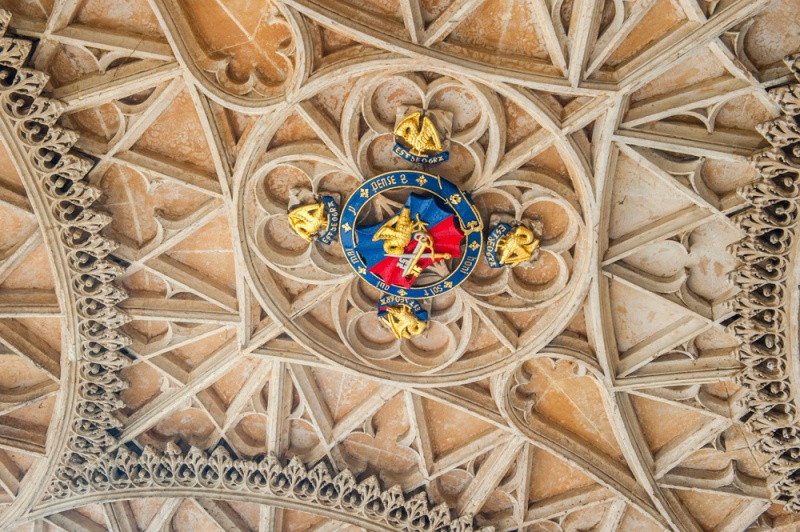 Vaulting in the gatehouse passage

The college's internal magazine is known as The Sundial, in honour of the college's most famous symbol.

Interestingly the main quad of Corpus Christi is the only one in Oxford without grass.

Corpus Christi stands at the west end of Merton Lane, though the entrance gate faces onto King Edward's. Unfortunately, the college is not usually open to visitors save for special events such as the annual Heritage Open Days event in September. However, tour guides often get access to the college for the popular walking tours that run from the tourist information centre on Broad Street.

If you don't want to try a tour, you can get a very good look into the main quad and its famous pelican statue from the gatehouse entrance. 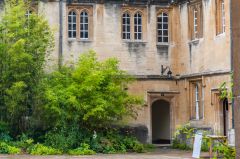