HERITAGE HIGHLIGHTS:   The Saxon tower is the oldest building in Oxford 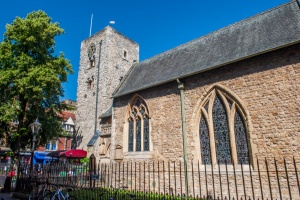 St Michael at the North Gate

St Michael's stands on the busy pedestrianised Cornmarket in the centre of Oxford. The church stands on the site of the north gate through the medieval city walls that protected Oxford, hence the name 'at the North Gate'.

The oldest part of St Michael's is the tower, built around 1040, making this Oxford's oldest surviving building. The rest of the Saxon church is gone, but the tower still remains and shows traditional Saxon architecture, including double lancet windows divided by a central round-headed column. The church was mentioned in the Domesday Book of 1086, where it was recorded as owning 2 houses, worth 52d.

The body of the church was rebuilt numerous times during the medieval period, sweeping away all trace of Saxon architecture except for the tower. The east window contains a small section of 13th-century stained glass, some of the oldest examples in England.

The 14th-century font was brought here from St Martin's church. Tradition says that while the font was at St Martins (Carfax), William Shakespeare attended a baptism service using the font, to be named a godfather of an Oxford friend. In the Lady Chapel is a restored 14th-century reredos, behind the altar. The east window of the Chapel has 15th-century glass portraying Christ as a lily flower. 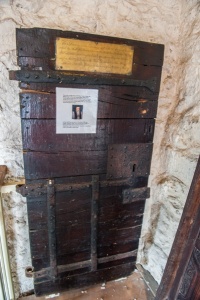 Within the tower is a reminder of one of Oxford's bloodiest moments. In 1555 Bishops Latimer, Ridley, and Cranmer were imprisoned at Bocardo Prison, located over the North Gate beside the church. The prison could be reached by a passage directly from the church tower.

The bishops, later known as the Oxford Martyrs, were burned at the stake in nearby Broad Street, and the cell door from the now-demolished prison was rescued and preserved inside the church. It is sobering to think that the bishops each passed through this door on their way to the stake.

St Michael's is the designated City Church of Oxford, meaning that the Mayor and Council Members are expected to worship here.

Among the historic objects of interest inside the church is the marriage certificate of Arts and Crafts pioneer William Morris. Morris and Jane Burden, who lived at nearby Holywell Street, were married here in 1859. Also on view is the 15th century pulpit from which John Wesley preached on Michaelmas Day 1726. You can view an 11th-century sheela-na-gig and a copy of the Geneva Bible of 1608.

The interior of the church shows the effects of its Victorian restoration by GE Street, but there are some lovely monuments to leading Oxford merchants. Visiting St Michael's is a bit of a peculiar experience; you enter by way of a gift shop, where you can pay a modest fee to climb to the top of the tower.

On the way, you pass the Martyr's cell door and the set of 16th-17th century church bells before emerging onto the tower roof. This gives wonderful views down Cornmarket, and across the surrounding rooftops.

I won't repeat the 'city of dreaming spires' cliche, but there really are a lot of spires to see at this level! You can enter the church without climbing the tower, though I do recommend the experience! 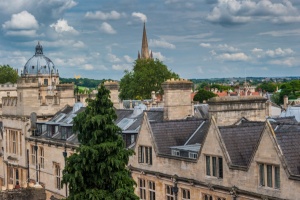 The view from the Saxon tower 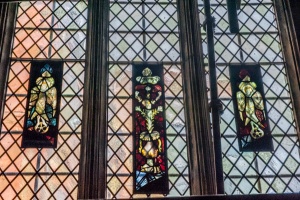 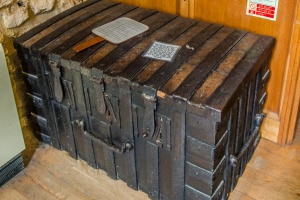