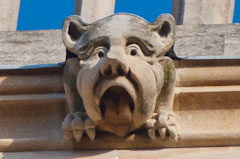 In 1071 the Norman lord Robert D'Oily built Oxford Castle. He must have felt some unease within his new domain, for the castle was fortified both against the city and the world at large.

Sometime in the late 11th or early 12th century, Oxford became a centre of learning for training clerics. On this base the uncertain history of Oxford University must stand. We don't know more precisely when a school or university was established. In some ways Oxford University was never really founded, it simply evolved. More than that it is impossible to say.

By the 13th century Oxford was firmly established as an academic centre, drawing students from all across Europe. Studies were centred on houses established by the Dominicans (1221), Franciscans (1224), Carmelites (1256), and Augustinians (1267). For a more in-depth look at the history of Oxford University click here.

Despite Oxford's growth during the medieval period, not all was smooth sailing. A calamitous fire in 1138 burned the city to the ground.

More dramatic events occurred just 4 years later. Queen Maud (Matilda) held the city during her interminable struggle with King Stephen. In the winter of 1142, she was besieged within the castle. She dressed all in white and her men lowered over the castle walls on a rope. Camouflaged against the snow, Maud crept through the enemy lines and escaped.

Oxford was hit hard by the Black Death (1348-1350). The colleges kept country houses where scholars could flee during periods of plague, but the residents of the city had no such recourse. The population of the city dropped heavily, and the colleges took full advantage by buying up vacant property and greatly expanding their holdings within Oxford.

John Wycliffe was Master of Baliol College in the 1360s. Wycliffe published religious works questioning the infallibility of the Pope. For this, he was denounced as a heretic, and forced to resign from his post at Balliol. Wycliffe's followers, known as Lollards, carried on the philosophical movement he had begun.