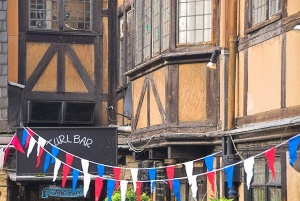 The relationship of Oxford University to the town (now city) of Oxford, has a rocky history, spotted with outbreaks of rioting and violence.

One of the most infamous outbreaks came on St. Scholastica's Day (February 10) in 1354. It started innocently enough, when some students drinking at the Swyndlestock Tavern, close to the Carfax Tower, accused the landlord of serving them "indifferent wine". The argument escalated until townsfolk came to the defence of the innkeeper.

The bells of St Mary's church called townsfolk to arms, and for three days they beat and killed students and ransacked the colleges.

The fallout from the riot was severe. The city had to pay for repairs to the colleges, and the Mayor and burgesses of Oxford had to swear allegiance to the Chancellor of the University every year and pay token damages in a special ceremony.

The ceremony continued well into the Victorian period. There is no record as to whether the quality of wine at the Swyndlesock Tavern improved. Note: the site of the tavern is now occupied by a bank. On the side of the building is a small plaque commemorating the riots.

Occasional riots continued into the 19th century, notably in 1867. The traditional night for conflict was November 5 (Bonfire Night), so both the University and the city council planned elaborate festivities for that night to distract people's attention.

Not the least of the city's resentment towards the University came from the scholars' legal precedence over the town. Until the 20th century, the Chancellor of the University had the legal right to trial over townsfolk. It was only in 1974 that the university lost the right to place its own representatives on the Oxford City Council.