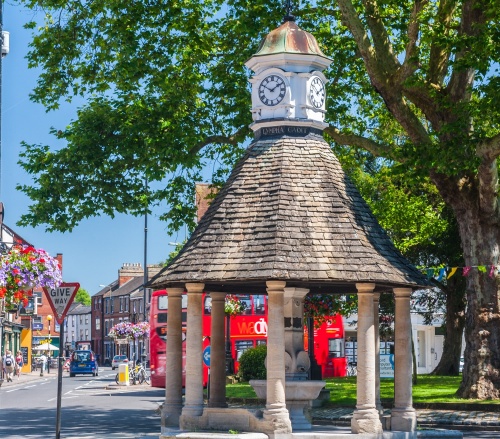 On 25 May 1899 Her Royal Highness Princess Louise, Duchess of Argyll and Queen Victoria's fourth daughter, unveiled a drinking fountain in her mother's honour at The Plain, a road junction immediately east of Magdalen Bridge, just across the River Thames from Magdalen College.

The fountain stands under a peculiar octagonal structure with a clock tower atop its conical tile roof. The structure's shape was meant to echo the shape of a toll house that stood on the site previously. A gilded weather vane tops the clock tower.

The Victorian Fountain was erected to mark both Queen Victoria's 80th birthday of 24 May and her Diamond Jubilee of 22 June 1897.

It was presented to the City of Oxford by Mr and Mrs G Herbert Morrell, owners of Morrell's Brewery, and was designed by the architect Edward Warren. Warren studied under the prolific late-Victorian architect GF Bodley. It certainly did not hurt Warren's career that his brother served as the Master of Magdalen College.

The fountain was made from a mix of Portland stone and York stone and is lined with copper. The fountain walls and roof columns are made from cream-coloured Milton stone, and the roof tiles are of Stonesfield slate.

A Latin inscription around the clock tower translates as:

The water drips,
the hours go by.
Be warned, drink, catch them
ere they fly.

The fountain has four basins, originally lined with copper, and four troughs for horses and dogs. 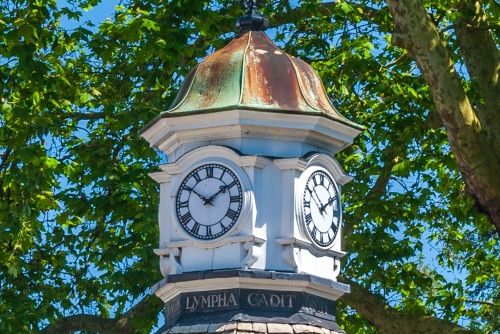 The fountain stands on the site of a graveyard that served the medieval church of St Clement. The churchyard was cleared in 1950 when The Plain became a roundabout. The church was pulled down in 1830 after it became too small to serve the area's increasing population and a new church was built on Marston Road.

When the railway came to Oxford, income from tolls fell dramatically. The turnpike was closed and the toll house pulled down in 1874. Old photos show it standing on precisely the site now occupied by the Victoria Fountain.

At the eastern end of High Street, facing Magdalen Bridge. Take care when visiting! The Plain has been called the second-most dangerous roundabout in England for cyclists.

Address
The Plain
OX4 1AS